I know I said I was going to finish a topic-set on Fungus and Fermentation, but I think I need to move along since it's 2015 and this blog has been on hiatus due to some truly tempestuous life events.

I will return with a Fungus and Fermentation Part II series at a later date. I think it's time to mix things up with a new topic, and that topic is "fats."

Stay tuned for the next post: Let's Talk Lecithin.

The Kombucha Chronicles: Part II - How to Grow a SCOBY From the Dregs of a Store-Bought Bottle


There are people who will tell you that it is inadvisable to create Symbiotic Colony of Bacteria and Yeast from a store-bought bottle of kombucha. They are wrong. Purchasing a SCOBY mother online could run you upwards of $20, or you could get one for free from a friend. In these tough economic times, free is best, but unless you live in Austin, your acquaintances probably don't have spare SCOBY discs laying around.You might have to resort to obtaining a SCOBY from a stranger on Craigslist.

After experiencing the wonders of home-brewed kombucha at Molly's house, I decided I would create my very own SCOBY from the dregs of a store-bought bottle.

If you've ever bought kombucha from the grocery store, you'll notice that every bottle has some slimy-looking crud floating around at the bottom of the bottle. That crud is the primordial soup from which your SCOBY mother will emerge.

Most online guides to SCOBY-growing recommend using unflavored kombucha to start your SCOBY. I happened to have a bottle of GT's Raw Organic ginger-flavored brew, so that's what I used. People will tell you that you have to use x and y amounts of water and sugar, but really it's up to you. It's like any food recipe--there's a general way to do it, and there are some things that need to be done in a specific order, but you can put your own spin on it. It is chemistry, but we're not making pharmaceuticals here. We're just cooking.

1. Clean and dry a large glass jar to incubate your SCOBY
2. Boil approximately 3 cups of water and half a cup of sugar--I used organic sugar.
3. Place 2 bags of tea (black, oolong, green, white--just not herbal tea: I used organic white tea,) in the pot and allow the pot to cool to room temperature. This is very important as you do not want to pour hot water into a non-tempered glass container. It can cause the container to crack or explode! You also want the sweet tea medium to be cool enough for the SCOBY to grow in it.
4. Pour the cruddy dregs form your store bought bottle into the cooled sweet tea and say a little prayer.
5. Cover the top of the jar with a clean, thin cloth and a rubber band so that the SCOBY can breathe, but bad bacteria and yeasts in the air will stay out. Put the jar in a dark, warm cabinet (I put it in the cabinet above my refrigerator) and forget about it for a few days.
6. Check the jar every two or three days to see how things are progressing. In approximately 10 days you should have a little SCOBY boppin' around in the jar. When it's about a quarter of an inch thick, you can transfer it to a new tea bath in a bigger jar and start brewing your first batch of kombucha!

Here's what I got after a week: 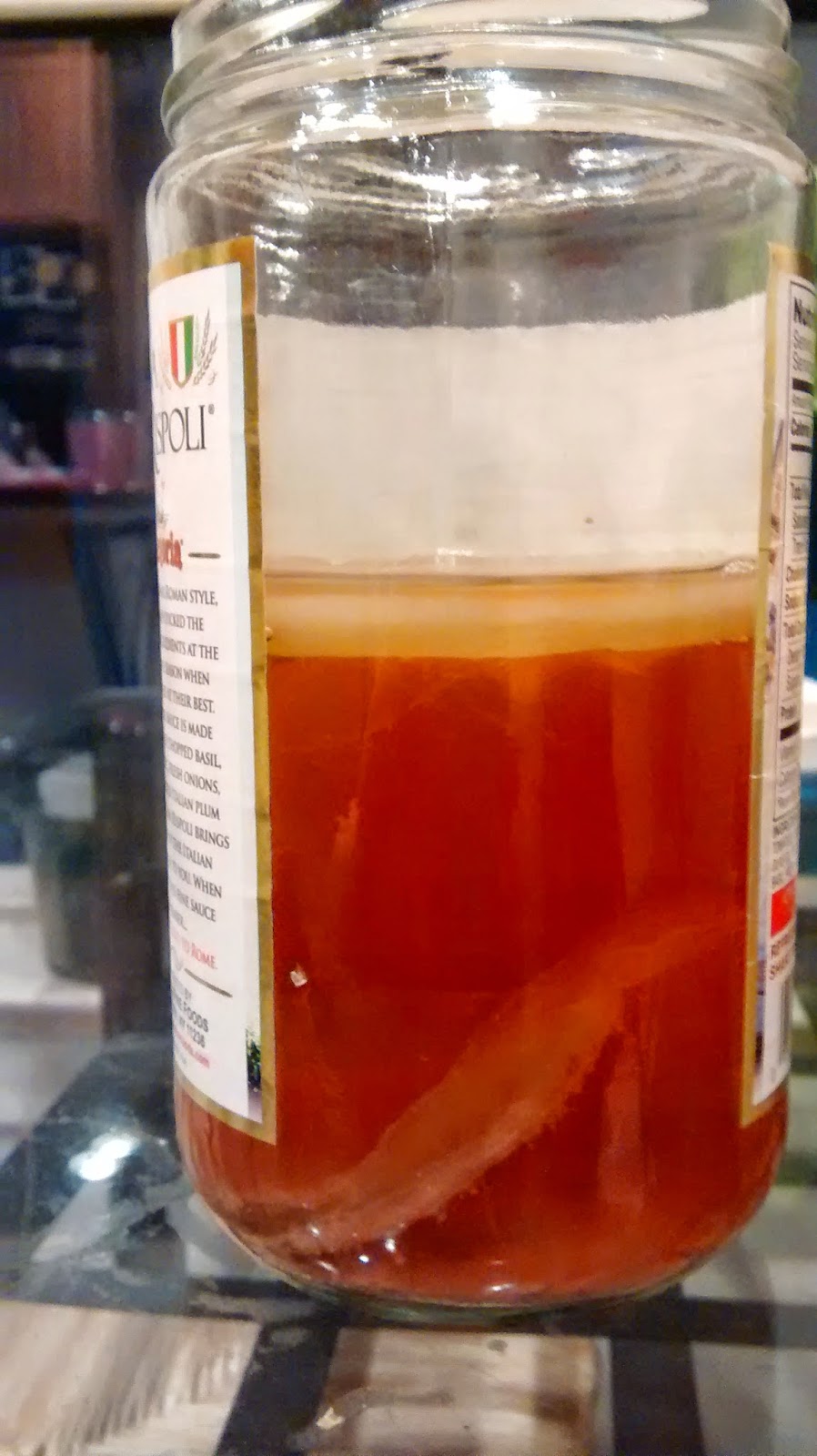 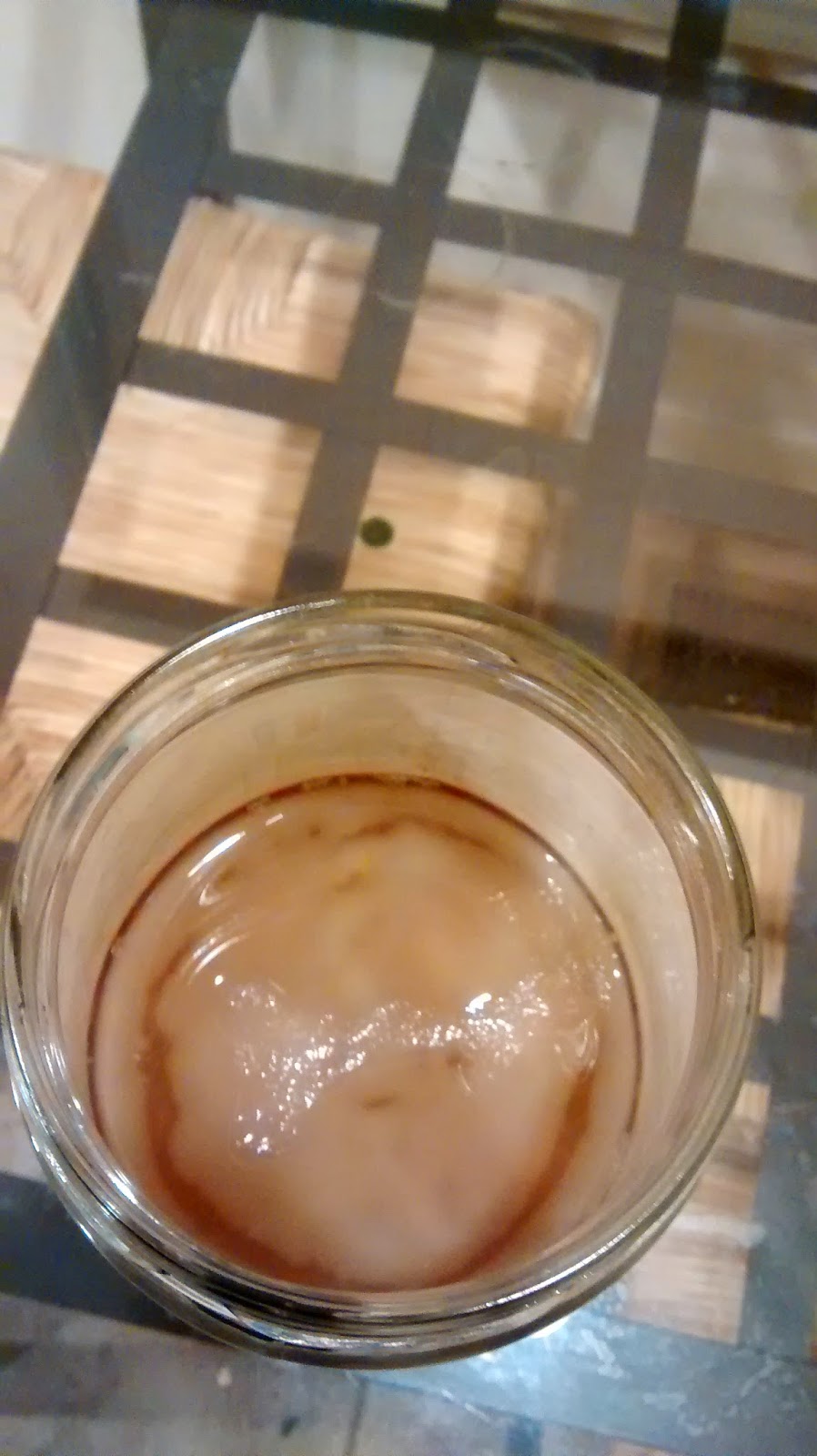 My kitchen is very warm--it only took about 6-7 days for a healthy SCOBY to materialize and quickly spawn a baby SCOBY.

I then brewed a giant batch of sweet tea and transferred the mother from the first jar to the larger jar: 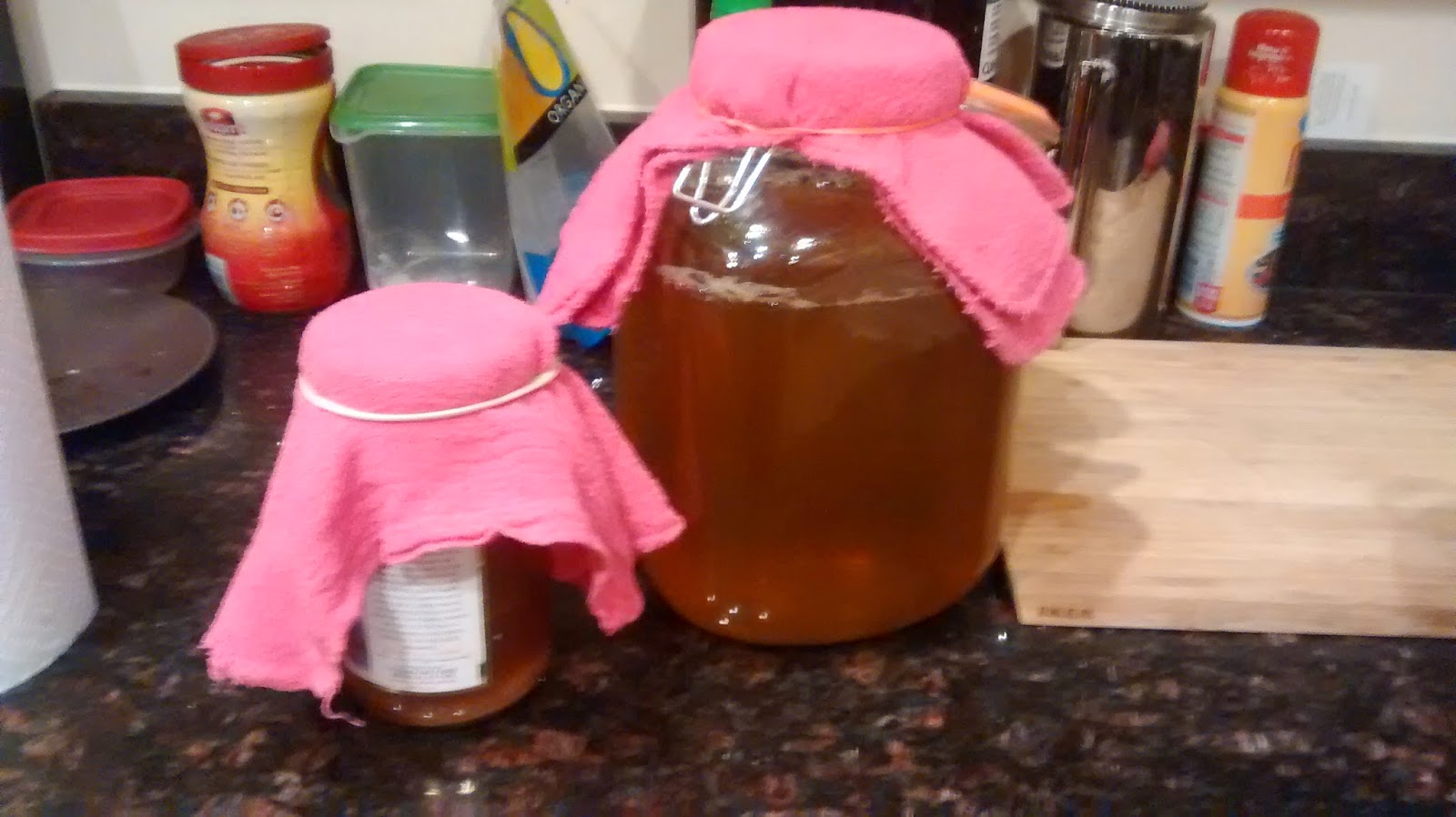 And now you never have to buy store-bought kombucha again. You can create flavored versions by adding fruit juices after brewing a batch and moving it into a new container. One of my friends added raspberry puree to a brew, mixed it with vodka and brought it to a party. Some people thought it tasted like vinegar, but with others it was a huge hit. And very dangerous. Kombucha really covers up the taste of liquor.

The Kombucha Chronicles: Part I

When I read an article in the Washington Post some years ago about the trials and tribulations of brewing kombucha, I was fascinated. I began to buy bottles of kombucha here and there at the grocery store; it tasted strange and almost awful at fist gulp, but subsequent sips lead to utter delight. I drink it because I love the taste and the carbonation, but also because I prefer it over yogurt as a source of probiotics.

The smell of kombucha is best described in wine tasting terms: the bouquet is straight-up bread dough. It almost smells like sourdough starter, which is not the most appealing scent for something you're about to ingest. However, it doesn't taste anything like bread. It tastes tart and sweet and has better bubbles than a can of seltzer water.

So what is it exactly? Basically, kombucha is what happens when a floating yeast and bacteria colony called a SCOBY (Symbiotic Colony of Bacteria and Yeast) sits in a vat of sweet tea until the tea becomes carbonated from all those microorganisms bumpin' and grindin' on each other.

Much like in the production of bread, yeasts consume the sugar in the tea and release gasses in the process. Acetic acid is produced by the bacteria in reaction to the alcohol created by the yeasts. This action helps the liquid maintain an acidity that bad bacteria and molds are terrified of! E.coli is not allowed to party in the pool with the SCOBY.

Kombucha originated in Manchuria around the turn of the century and quickly spread to eastern Russia. In Russian, it is called chainyj grib (чайный гриб), meaning "tea mushroom" or "tea fungus."  Like other fermented foods, kombucha contains probiotics, a.k.a healthy bacteria, which are good for the digestive tract. It also contains other nutrients like B-vitamins and vitamin C.

A recent trip to Austin inspired me to make some of my own home-brew. I had always been hesitant to get into brewing beer or wine at home because of the perceived difficulty and time involved in creating a successful batch. I didn't want to invest in brewer's yeast and the other accouterments required for making my own beer. Then I was enlightened in Texas.

My friend Molly, a writer living in Austin, had been brewing her own kombucha for a few months. Two giant mason jars filled with the stuff sit brewing on her kitchen counter at any given moment.

If you move to Austin, it's only a matter of time before you start getting tattoos and making your own kombucha. It's how you know you've arrived in society. Half of the bars in Austin serve kombucha on tap, alongside the beers, with the local Wunder Pilz brewery (kombuchery?) dominating the market.

Once I returned from the trip and started tabulating the dozens of dollars I had spent on bottled and on-tap kombucha in Austin, I realized that it is much more practical to brew one's own kombucha. Also, after being allowed the privilege of touching Molly's SCOBY (with well-washed hands) while a new batch was being made, I knew I had to create one of my own, if only to fondle it.


Stayed tuned for Kombucha Chronicles Part II: How to Brew Kombucha From the Dregs of a Store-Bought Bottle!
Posted by K. McD. at 8:24 PM No comments: 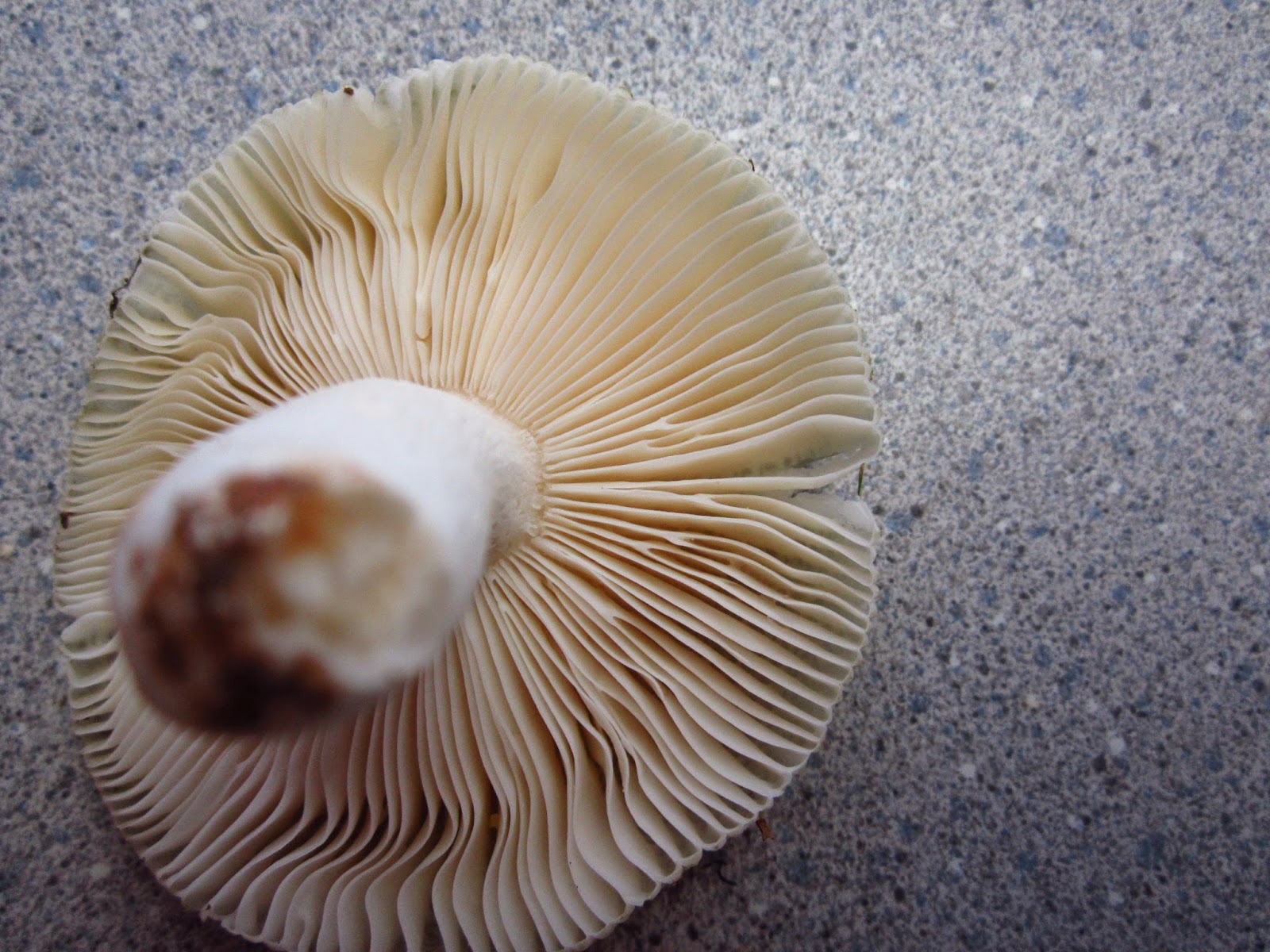 The first topic-set covered in this blog will be Fermentation and Fungus. I will publish a series of articles about fermented foods and the role fungus plays in fermentation!

Topics include:
- How to Brew Kombucha (from the dregs of a store-bought bottle)
- The Quiet Lives of Mushrooms
- Yeasty Business: Bread
- Tales From the Keg: A History of Beer

Food is more than fuel for our bodies: food is culture, ritual, and metaphor. If you examine the way a society eats, you can understand a great deal about its structure and ethics. People get really worked up over food: what to eat, when to eat, how to raise it, how to cook it. The science and history of nutrition and agriculture are endlessly fascinating!

Most Americans are completely disconnected from food production. We can go to the grocery store and buy fruits and vegetables that are completely out of season in our local area. We are living in an era in which general food production resembles something out of a sci-fi novel, and few realize it. People thoughtlessly buy plastic-wrapped cuts of meat without consideration for the economic and and ethical issues surrounding the journey their steaks took from the farm to the refrigerator. And who among us has ever attempted to survive on homemade bread?

As an on-again off-again vegetarian, CSA member, and ardent home cook, I spend a lot of time thinking about food. How does food affect brain chemistry? Why did humans decide to milk other animals? What is the history of pesticides? Why don't more people bake their own bread? What exactly is cream of tartar?

This blog is not only a venue for me to practice my craft as a writer, but also a space to explore these passing thoughts. I hope to examine these and other topics in an entertaining and enlightening manner, instead of letting them float away while I wander the aisles of the grocery store.

I have named this blog Exquidibles—a portmanteau of “exquisite” and “edibles.” In this blog, I will delve into a plethora of issues, practices and histories surrounding food, and maybe even a recipe or too.